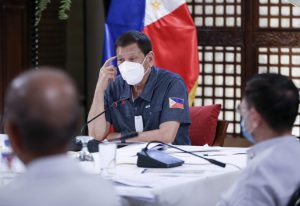 The Philippine government has been boasting that as early as March 16, they had the gumption to implement a lockdown in major cities and provinces in response to the unfolding COVID-19 pandemic. However, Manila’s overall response to the pandemic has been fraught with incompetence and rife with terror.

The implementation of the Enhanced Community Quarantine (ECQ) came on the heels of serious negligence — namely, the authorities failing to keep up with the preventive measures of neighboring countries and grossly underestimating the virus. What’s worse, instead of easing the overall burden that the virus unleashed on the country, it seems the last resort lockdown itself added to a plethora of problems without adequately addressing the primary crisis at hand: ensuring public health and safety.

Strict compliance with the ECQ is ordered for all citizens, with the exception of frontline professionals, until at least May 15. That has meant curfews, harsh penalties for being outside, and an impoverished population descending into hunger.

The global crisis is first and foremost a public health issue, but Philippine President Rodrigo Duterte has faced the coronavirus pandemic in a decidedly militaristic fashion. Since the lockdown went into effect, he has peddled the narrative of pasaways or “undisciplined” citizens as responsible for the ensuing problems. He has also brought up unsubstantiated activities of guerrilla groups as threats to government aid efforts without conceding any missteps in his management. On top of deploying thousands of police and soldiers throughout the archipelago to enforce the ECQ, Duterte has on two occasions threatened the public with all-out martial law. There have been moments of abject incompetence from those in power around the world, but using the pandemic as a reason for increasingly flexing authoritarian muscles spells danger for the Philippines post-lockdown.

While Singapore, Taiwan, Vietnam, and Hong Kong took the early initiative on travel restrictions and emergency measures, the Philippines was noticeably late to follow suit. Duterte ordered a travel ban only for passengers coming from Wuhan, China specifically on January 31, a day after the first case of COVID-19 was confirmed in the Philippines. A few days later, the ban was expanded to the entirety of China, with the delay, as affirmed by Department of Health (DOH) chief Francisco Duque, attributed to a reluctance to upset relations with China.

Downplaying the hysteria as Filipinos scrambled for protective, medical, and sanitation equipment, Duterte attempted to allay fears in early February, saying there was “nothing really to be scared of.”

Meanwhile, there was a noticeable rapid decline in supplies of items like face masks. On the day the first case was confirmed in the Philippines, presidential spokesperson Salvador Panelo clarified that the government wouldn’t be distributing masks to vulnerable populations as it had none to give out. But a few days earlier, government leaders were touting Philippine generosity in aiding China with a donation of masks worth $1.4 million that were shipped to Wuhan.

A full month passed before Duterte officially declared the country in a “State of Public Health Emergency” on March 9, five days before the number of confirmed COVID 19 patients breached the 100 mark. A week later, the government announced its initial emergency response package to the virus, totaling $535 million. With hospitals reportedly lacking in personal protective equipment (PPE), the financial stimulus came with disheartening details that half of the amount was intended for boosting the tourism industry and only 11.4 percent was aimed toward the acquisition of testing kits and other materials to curb the virus.

The World Health Organization (WHO) has urged the mass production and use of testing kits as a basic necessity in combating the pandemic, yet even the DOH on March 20 felt that there was “no need for mass testing yet,” a reminder of how they sorely misread the situation.

Doctor Josh San Pedro, a co-convener of the Coalition of People’s Right to Health (CPRH), explained to The Diplomat that “health authorities may have been complacent, as it was only in mid-March that significant improvements were made to testing capacity, despite locally-made kits being ready as early as February. With a slashed budget for disease surveillance and epidemiology for 2020, contact tracing was increasingly difficult in Metro Manila for example, one of the world’s most densely populated cities.”

More infuriating for the public was the fact that the department confessed, two days later, to giving preferential treatment and testing to 34 unnamed public officials and their families. The president of PDP-Laban (Partido Demokratiko Pilipino–Lakas ng Bayan), Duterte’s party, Senator Aquilino “Koko” Pimentel III, was among the legislators who tested positive for COVID-19. He subsequently drew flak for violating quarantine protocols to visit his pregnant wife in the hospital, putting all the medical staff at risk. The incident has warranted no probe nor sanction from the authorities.

Virtual banking – how we embrace it whilst managing the security risks behind?

Money has been the cornerstone of everything in this world. Without it, I don’t know how the world and individual…

How Bangladesh is addressing the Covid19 pandemic

Bangladesh is home to nearly 170 million people. It is no stranger to crises. It also happened to be the…

The Morality of Capitalism and Socialism VS Capitalism